Despite the announced contraction of Africa’s GDP as a result of covid-19, some African economies will still show some resilience in 2020, according to the AfDB. Among the front runners are Rwanda, Ethiopia, Tanzania, Côte d’Ivoire and Senegal.

In the supplement to its annual report on the “economic prospects in Africa in 2020” published Tuesday July 7, the African Development Bank (AfDB) now forecasts a contraction of the continent’s GDP by 1.7% this year under the effect of the covid-19 pandemic, down 5.6 percentage points from January projections.

These projections based on a “baseline scenario” established by the Bank induce GDP losses of around $ 145.5 billion out of the $ 2,590 billion projected in 2020 for Africa before the onset of the pandemic . Despite the prospect of a general recession on the continent, some economies still show some resilience in the face of the negative consequences of the health crisis.

According to the AfDB, growth should be “more resilient in resource-intensive economies”. Most of these countries have indeed entered the crisis with very high average growth rates, higher than 5.6% in 2019. “Their resilience anchored in diversified economic structures and solid public investment efforts is put put to the test by interruptions in supply chains and the invasion of locusts which have greatly disrupted agricultural production in certain countries, ”notes the report.

Taking into account the base scenario established by the Bank, Rwanda should post the strongest growth in 2020, despite covid-19 with a projected rate of 4.2%. It is followed by Ethiopia and Tanzania which are expected to each post 3.6% GDP growth this year. Côte d’Ivoire is in fourth position with projections of 3% growth. As for Senegal, which ranks fifth in this ranking, it should end the year with GDP growth of 2.8%. 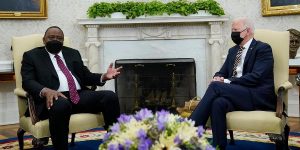