Addis Ababa, ANGOLA, February 10 – The new President of the African Union (AU), Cyril Ramaphosa, has chosen conflict resolution for the long-awaited stability on the African continent as the focus of his mandate.,
The Head of State of South Africa was speaking at the 33rd African Union (AU) Summit, which opened last Sunday in Addis Ababa, with the participation of the Angolan President, João Lourenço.

Cyril Ramaphosa, who replaced the Egyptian counterpart, Abdel Al-Sissi, indicated that he will work with President Denis Sassou Nguesso, as head of the Libya-AU High Level Committee, to convene a conference for dialogue and promote cease fire in that country.

He also informed that the organization will continue to work with the parties in dispute in South Sudan, for the implementation of issues pending on the revitalized agreement, within the scope of the formation of a Government of National Unity.

In May this year, South Africa will host an Extraordinary Conference of the African Union (AU), which will analyze the implementation of the main roadmap of the continental organization to respond to emergency circumstances.

According to Cyril Ramaphosa, President of South Africa and the AU, the Summit must produce concrete actions for conflict resolution on the continent.

According to the AU President, it is also necessary to face the acts of terrorism that are plaguing the regions of the Sahel and the Horn of Africa, a phenomenon that tends to spread to southern Africa.

South Africa already assumed the rotating presidency of the AU in 2002, in the historical re-launch of the organization, with President Thabo Mbeki at the time.

Fighting poverty on the continent

The Secretary-General of the United Nations, António Guterres, warned about the urgency of combating poverty in the continent, recalling that Africa has also been the victim of unequal globalization and the region that suffers most from climate change.

He indicated that Africa’s challenges can only be solved with well-structured African leaderships.

According to the UN Secretary General, who was speaking at the opening of the 33rd AU Summit in Addis Ababa, silencing arms is not only about peace and security, but also about inclusive and sustainable development and human rights.

António Guterres also asked the international community for more determination in the fight against illegal financial flows to complement efforts to fight corruption in African countries.

He argued that such scourges are depriving countries of essential resources for their development.

On his turn, the chairman of the African Union Commission, Moussa Faki, called for the removal of Sudan from the list of countries that support terrorism and a mobilization of institutional support for the development of that country.

The 33rd AU Summit will run until Monday (10), under the motto “Silence weapons: Creating a favourable environment for development”.

On the table is the final report of the reform project of the continental organization, which aims to make its structures less bureaucratic, more functional and adapted to the challenges of the new times.

The summit should also validate the consensus reached last year on the institutional reform of the organization and take steps towards the implementation of the African Continental Free Trade Area (FTAA) project.

The summit is also reviewing leaders’ reports on specific thematic issues, including the malaria alliance, health sector financing, monitoring the implementation of the AU 2063 Development Agenda, as well as the issue of combating terrorism and extremism in Africa.

It was also announced at the opening of the 33rd AU Summit that Cyrill Ramaphosa will be replaced, next year, in the rotating presidency of the organization, by the President of the DRC, Félix Tshisekedi.

On the sidelines of the great event, President João Lourenço participated, with other African statesmen, in the inauguration ceremony of the Committee on Intelligence and Security Services at the AU headquarters. 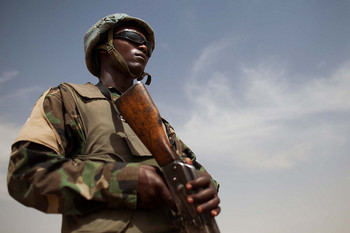