Rwanda’s Ministry of Local Government has awarded two Districts namely Kirehe and Rusizi for admirable and excellent results from Umuganda, a community work held at the end of each month.

The Ministry awarded Districts whose Umuganda activities had and will continue to having positive impacts on the socio-economic well-being of Citizens.

The Minister of State for Socio-economic Development, Harelimana Cyriaque joined the residents of Kigarama Sector in Kirehe District to carry out exceptional umuganda activities which was followed by awarding ceremony which takes place on Saturday, 14th July 2018.

Before handover of awards to the winners, a special Umuganda was organized and activities focused on piling stones for the construction of school latrines and sustaining school infrastructures. Minister Harelimana Cyriaque offered them the trophy and a check of 2.5 Million Rwandan francs  to recognize their commitment in umuganda which enabled them to construct three classrooms for their own community in Nyakerera Cell, Nyabubare Village.

Minister Harelimana congratulated the residents for providing an invaluable asset for their children which is going now to initiate nearby nursery and primary school to facilitate their children who were used to travelling more than 4 km to go to school.

The construction cost for the three classrooms reaches 20 million Frw; its 53% was accomplished by umuganda activities while cash contribution from the residents equals 9.3 million Frw.

The residents of Rusizi District were awarded as the second winner for the construction of  health Centre constructed through umuganda activities.

The total amount spent on the centre is 12.5 million Frw with involvement of the citizens worth of 62% while their cash contribution is 4.7 million Frw.

The health post enabled the residents to acquire a trophy and a check of million Frw.

Since 2010 Umuganda competition is an annual event organized by the Ministry of Local Government to motivate the citizens to look for long-term solutions in a bigger picture while planning and implementing umuganda activities so as to innovate initiatives which respond to their need and challenges. 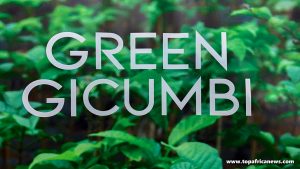